The Birth of West Meets East! Feng Shui and More!

Hello to all. Many changes have occurred for all of us the last few months. It is important to support and honor new births, new homes, new businesses, new changes, and even deaths of old ways, old issues, old residences and those dearly loved ones who have passed on. If you have had problems moving forward and letting go of the past, and you want to find peace within your heart and home, I hope you read the Dear Diary articles in the last two or three weeks that were written for the Benicia Herald in Benicia, California. I recapped my July and August visit to the area. It focused on many of the challenges we are facing and the death of my Master Teacher, His Holiness Lin Yun, who traveled the world to teach Feng Shui until his body could not keep up with his mind. Professor Lin encouraged me to teach, but also to write, which I had never done before; but miracles never cease, and with his faith I began a quest to bring Feng Shui to the public through the world of newspapers, magazines and books. I still can’t believe I was able to conquer the fear of spelling and trying to write for a newspaper.

The column called “West Meets East” is still popular after 13 years! It seems only yesterday the editor of the Herald, John Moses, gave me a break to write a Feng Shui column. For over a year I begged, bribed him with fine cigars, and generally made his life miserable to let me write about the Art of Placement. My art gallery and shoppe was located in the old Tannery Building. Every time he stopped at the cigar store next door, I would hear his unmistakable voice choose one of “Spud’s” expensive “smokes.” Immediately I would stop what I was doing and chase John down the street, asking one more time if I could just please write six columns for six weeks, 500 words. One day he turned around suddenly with a look I will never forget. It looked as if he was going to have me arrested! I jumped back a little fearing his reprisal. Suddenly he replied quite loudly, “One week, 300 words,” to which I said, “Six weeks 400 words.” With the quick response of a ping-pong match, John concluded his rally with, “Four weeks 400 words, and don’t you get me in trouble and write something too weird.” Now I was in deep trouble … I didn’t own a computer, didn’t know how to write, and had to hire someone to type the ten pages a week of longhand. Sometimes the article took four hours to write and sometimes eight hours. It still takes three to four hours every Monday morning to put together, but the love of writing is one of the many gifts Master Lin gave me, so I can share the power of Feng Shui. And the rest is history! 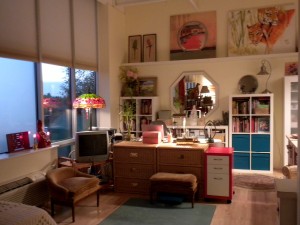 Feng Shui became mainstream in the Bay Area and the world over the next few years. Although India and China recorded the interaction of weather and land formations in relationship with humans thousands of years ago, the West resisted the language of the ancients, not understanding the value of these hidden treasures. Now with the planet trying desperately to retain balance, Feng Shui is definitely a tool for survival at the deepest level of harmony and balance with nature and the cosmos. I hope I have played a part in educating readers that these seemingly strange words, when translated, are very timely and tame. Feng Shui, pronounced, fung shway, innocently means wind and water, or way to balance the elements of Wind and Water in your home, your business and the world.

For years I have given lectures, classes and workshops on art, herbs and Feng Shui in many cities. On my recent trip to the Bay Area, I spoke at the Solano County Realtor’s meeting. I enjoyed seeing many of the same people and was surprised to have several realtors stand and give testimony of how my private consultations had altered their private lives and their business careers. Although I still give talks and workshops to organizations, the phone and computer are technology’s gift to giving phone consultations. Pictures can be taken quickly and then scanned, and Google Earth can see your house, location and lot size. Now I am able to work with individuals, builders, architects, all types of facilities, cities, companies and corporations by phone and computer.