Art The Mysteries of the Plant World

The Mysteries of the Plant World 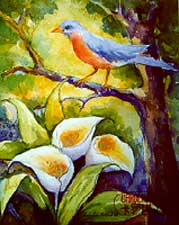 I have found the plant world fascinating for as long as I can remember. According to my father’s recollection, I picked every weed and flower within my reach, only to pull apart and detach each part or petal, one at a time, until only a naked lonely stem remained in my chubby clenched fist. A puzzled look formed on my face as I watched the pretty little remains of the plant slip away into the summer’s breeze.

Nothing was safe during my safaris. Daddy said my favorite varmints were those with the most legs and I would delight in showing the latest catch to Mother, who reacted with screams which woke up the dead, he related. Upturned rocks revealed critters in every size and shape, I recalled. “Rollie bugs were really fun, as it took them a long time to escape. Snakes slithered at rapid speed, scooting across rocks and hiding deeper into cracks and crannies, and I learned if you grabbed them by the tail, it sometimes fell off, but the slick long body didn’t slow down and scurried on its way, with or without the remaining skin. “How did that happen,” I wondered.

Grubs and worms could be found in special moist dark dirt. I delighted in collecting the creatures with my Grandfather Sheppard for his fishing trips. I rode in his old black car on an upturned bucket, which replaced the passenger side seat on fishing days. But by Sunday morning the car was cleaned and polished and the “real seat” put back in place for my Grandmother. Mama and Papa Sheppard’s car was fully packed with grandchildren on the Sabbath, like sardines, as I recall. On my mother’s side of the family I had twenty- two cousins and there was never a dull moment when we got together. It took a lot of fish to fill up “us children” and their parents for Sunday dinner.

Out of all the cousins, though, I was the least squeamish youngster and could be counted on to help Grandpa bait his hooks. We were a lot alike. He loved the outdoors, the silence and at later at eighty-three years old, took up painting. He painted on any surface that didn’t move and created many, many wonderful pictures before he “went home to his maker” at ninety-seven. I still have two of his masterpieces, one of two Indians and another of a country scene with a house, trees and a fishing pond. We had a wonderful letter-writing relationship during his artist days, as I was teaching college art and he asked many questions about paints, brushes and thinners in his correspondence. We shared a lot in common about gardening and wildlife, which was also passed down to my Mother before I was born. 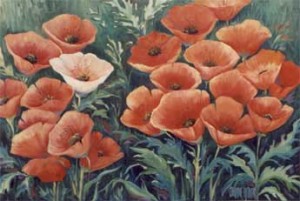 Later I studied at length on the properties of my of these “foods” used by “Mother’s people.” From sassafras to dandelions, the plants we now call weeds provided our ancestors with vitamins and minerals needed for health. Poke and Dock were two “weeds” which “cleaned you out” and were cooked with spinach to tone down their effects. The greens, as they were called, simmered on the back of the stove, until they were safe to eat. Vinegar was added to give them tartness, and sometimes turnips were added to pot and boiled in the dark juices.

Some of my favorite herbs are as far away as your back yard. They vary from climate to climate, but living many different places in my life, I have been able to gather and use easily, dandelion, which contains many minerals and cleanses the liver. Its golden flower contains beta carotene and can be added to pancakes and muffins, mullein for the lungs, horsetail contains silica, stinging nettles is a super plant to restore blood and has a multitude of uses. As a young plant can be cooked as a vegetable, oat straw to calm and heal nerve damage, plantain for insect stings, sage for crones aches and pains, red clover as a blood cleanser and cancer preventive, Hawthorne berries for regulating blood pressure, whether high or low, rose hips for a vitamin C tea, chamomile to calm the nerves and help for sleeplessness, fennel for a spicy treat, miner’s lettuce to add in salads.

Walking into your own backyard, you may still find many of these powerful helpers, as they tend to come to you when you need their help. When giving Feng Shui consultations, I always observe the plants surrounding the property. Nature has a unique memory and will support your body. Although not all people are interested in finding out more about these natural foods and medicines, I feel fortunate to have learned this knowledge from my Grandfather and Mother. I give classes on tincturing many of these natural remedies and hope the names of these plants may give you a desire to see what cures are living in your own backyard.